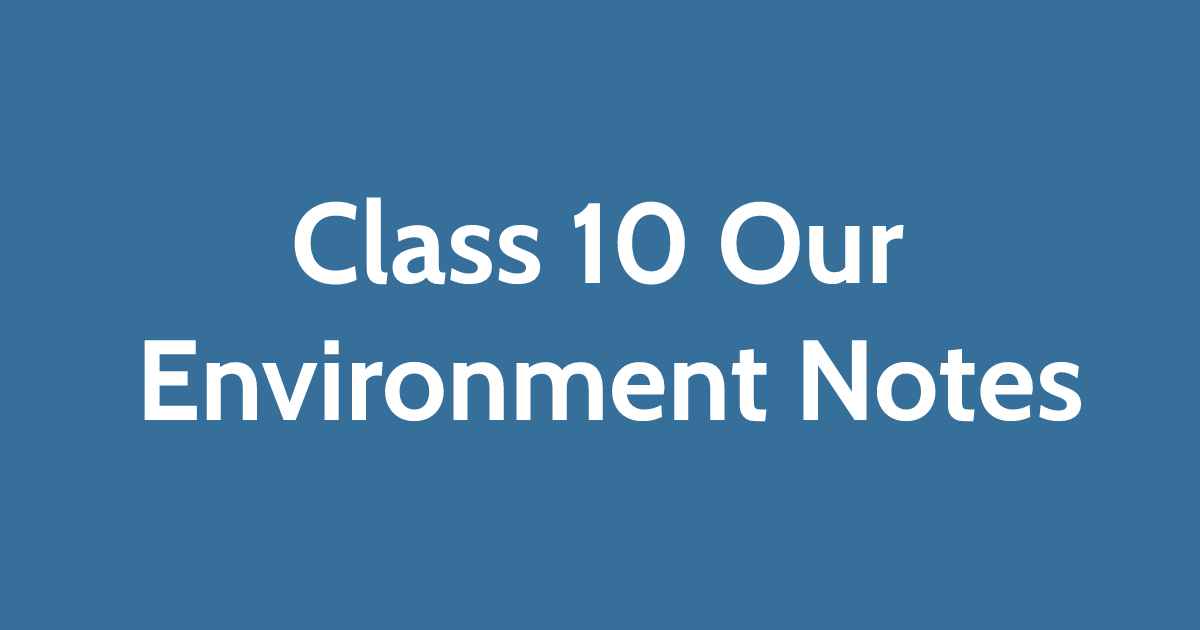 The natural environment or natural world encompasses all living and non-living things occurring naturally, meaning in this case not artificial. The term is most often applied to the Earth or some parts of Earth.

Here we have provided quick revision notes for class 10 Our Environment chapter. Make sure you have a thorough knowledge of the topics before revising from these notes.

Ecosystem, Ecosystem Components, Biodegradable and Non-biodegradable Wastes Our physical surroundings, such as air (or atmosphere), water bodies, soil (land), and all organisms such as plants, animals, humans, and microorganisms such as bacteria and fungi, are all part of the environment (called decomposers). The waste materials created by man’s and animals’ diverse activities are poisonous to some degree and can be separated into two kinds.

1. Biodegradable Wastes: Biodegradable wastes are substances that can be broken down by biological processes. The operations of fungi, bacteria and other living organisms break down these chemicals. The degradation of biodegradable chemicals is also influenced by temperature and sunlight.

2. Non-Biodegradable Wastes: Materials that do not degrade biologically.

processes. These substances can exist as solids, liquids, or gases. These compounds are either inert and merely survive in the environment for a long time, or they may cause harm to ecosystem members.

An ecosystem is a self-contained unit consisting of living things (plants, animals, and decomposers) and their non-living environment (soil, air and water). For instance, a forest, pond, lake, or green area.

Energy and matter are constantly exchanged between living and nonliving components in an ecosystem.

The terrestrial ecosystem is represented by the desert, grassland, and mountains (land-based ecosystem).

The aquatic ecosystem is represented by ponds, rivers, lakes, and the sea (water-based ecosystem). Garden, crop fields, parks, aquariums, and other man-made artificial ecosystems are examples.

1. The biotic component is made up of three different sorts of organisms:

(a) Producers: Using light energy, all green plants and blue-green algae can make their food (sugar and starch) from inorganic substances (Photosynthesis). Be a result, all green plants are referred to as producers. They’re also known as autotrophs.

Planktons are microscopic organisms that float freely on the surface of the water in ponds, lakes, rivers, and oceans. Phytoplanktons and Zooplanktons are the two types of planktons.

Phytoplanktons are microscopic aquatic plants that float freely on the water’s surface.

Zooplanktons are minute aquatic organisms that float freely in the water. Zooplankton is made up of freely floating protozoa.

(a) Consumers: These are species that eat or consume the products of other organisms. This category includes all animals. Consumers are directly or indirectly reliant on producers for their sustenance. They devour other organisms or their products as a source of nutrition. Man, goat, deer, fish, lion, cow, buffalo, and other animals are common consumers.

The following sorts of customers can be identified:

(I) Herbivores: These are organisms (animals) that eat the producers (or plants) directly for food. First-order consumers are also known as herbivores. Herbivores include animals such as deer, rabbits, rats, squirrels, goats, cows, and others.

(ii) Carnivores: Carnivores are organisms (animals) that eat other animals. Carnivores eat the flesh of herbivores as a result. These are also known as second-order consumers or primary carnivores. Snakes, wild cats, jackals, frogs, birds, and fish are just a few examples.

(iii) Omnivores: Omnivores are organisms that feed on both plants and animals. Humans are common examples of omnivores because they eat both plant and animal items (for example, pulses, grains, oilseeds, fruit, and so on) (milk, meat, egg, etc.).

(c) Decomposers: Fungi and bacteria that break down (decompose) complex chemicals in dead plants and animals into simpler components. Natural resources are replenished with the help of decomposers. These are also known as saprotrophs or microorganisms. Reducers are another name for these.

2. Abiotic Components: These are ecosystem components that are not living. The physical environment is one of them.

Soil texture, topography, water, and air are all edaphic influences.

Carbon dioxide, nitrogen, oxygen, water, phosphorus, sodium, potassium, and calcium are examples of inorganic substances. These are involved in the ecosystem’s material cycle.

Proteins, carbohydrates, and lipids are organic substances. These make up the majority of the living organism and connect the abiotic and biotic elements.

The sun’s temperature, pressure, humidity, moisture, and rainfall are examples of climatic elements. These variables have an impact on the dispersion of organisms.