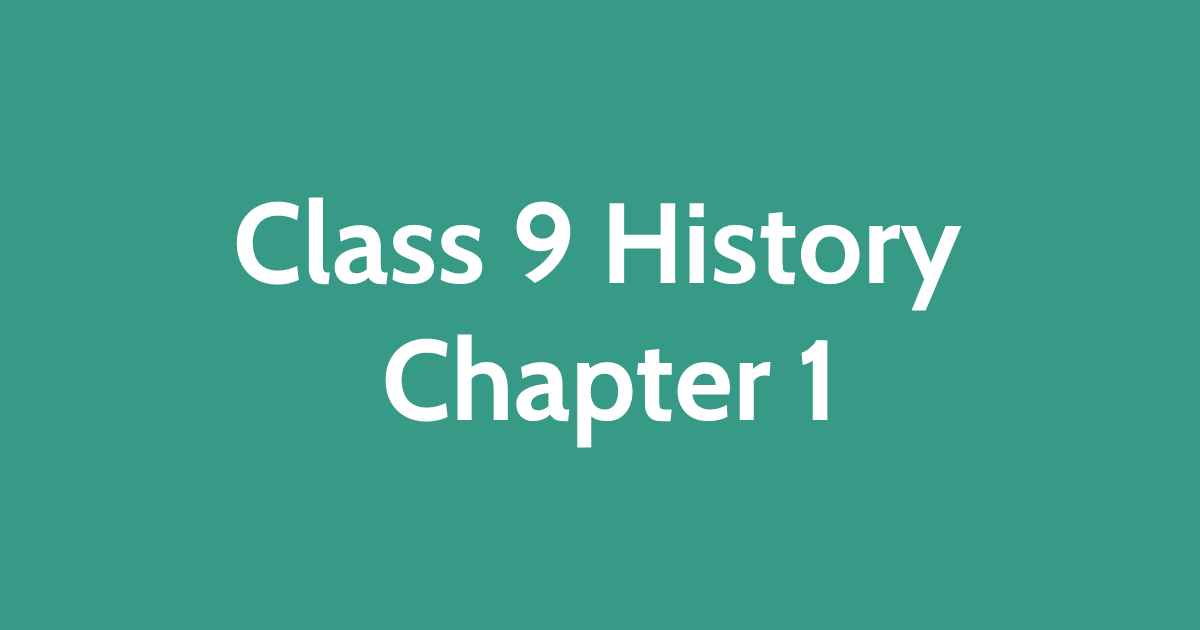 Here is a compiled notes of Class 9 history chapter 1 – French Revolution notes. You should first study minutely the concepts from the textbook before revising the chapter from the below notes. These concise notes will help you with revision during the exams.

Society in France In the late eighteenth century

Louis XVI ascended the French monarchy in 1774. Because of the conflict, France’s financial resources were depleted. Under the leadership of Louis XVI, France aided the thirteen American colonies in gaining independence from Britain. Regular expenses, such as the cost of keeping an army, the court, running government offices, or universities, were met by raising taxes. In the eighteenth century, the land of France was divided into three estates. The feudal system, which dates back to the Middle Ages, was a part of societal estates. Peasants made up 90% of the population, although only a small percentage of them owned the land they farmed. Nobles, the Church, and other wealthy members of the third estate possessed 60% of the land. Members of the first two estates, the clergy and nobility, were born with particular advantages. These individuals were free from paying taxes and were granted feudal privileges. All members of the third estate were required to pay taxes to the state, which included a direct tax known as taille, as well as several indirect levies levied on everyday items such as salt and tobacco.

The Battle for Survival

As the world’s population grew, so did the demand for food grains. Because grain production could not keep up with demand, the price of bread skyrocketed. The gap between the rich and the poor has expanded as a result of the low pay paid to labourers. When the harvest was hampered by dryness or hail, things got even worse.

A Growing Middle Class Envisages an End to Privileges

Historically, peasants took involved in revolts against taxes and food deprivation. The third estate had prospered and had gained access to education and new ideas. New social groupings arose in the eighteenth century, dubbed the middle class, who made their money by growing international trade and manufacturing woollen and silk fabrics that were either exported or purchased by the wealthier segments of society. Lawyers and administrative officials were included in the third estate. A person’s social standing was determined by their achievements.

All of these groups were educated and held the belief that no one should be favoured by birth in society. Rather, a person’s social standing must be determined by his abilities. Rousseau suggested a new kind of governance based on a social contract between people and their representatives.

Similarly, Montesquieu advocated for a separation of powers among the legislative, executive, and judicial branches of government. This government model was implemented in the United States. To cover the costs, Louis XVI planned to levy additional taxes.

The Outbreak of the Revolution

The monarchy in France did not have the authority to levy taxes. To pass proposals for new taxes, they had to convene an assembly of the Estates-General, a political body to which the three estates sent representatives. On May 5, 1789, Louis XVI convened an assembly to enact new tax plans. There were representatives from the first and second estates there, as well as rich and educated residents of the third estate. Each estate got one vote, according to the principle. Representatives from the third estate, on the other hand, urged that each member have one vote. When the demand was turned down, members of the third estate took to the streets to demonstrate. They vowed not to disperse until France had a constitution created that limited the monarch’s powers.

Bread prices increased as a result of the harsh winter, and people had to wait in long lines for hours. The lords of the estate were said to have hired bands of brigands to destroy the ripe crops. Peasants began plundering stockpiled food and burning documents bearing records of manorial dues out of fear. Nobles were forced to flee their homes. The National Assembly was recognised by Louis XVI, and he accepted the principle that his powers would now be limited by a constitution. On August 4, 1789, the Assembly enacted a decree abolishing the feudal system of responsibilities and taxes. Tithes were abolished, and the Church’s lands were confiscated.

The National Assembly finished the draught of the constitution in 1791, with the main goal of limiting the monarch’s powers. These powers were now divided and delegated to several organisations, including the legislature, executive branch, and judiciary. France was transformed into a constitutional monarchy.

Citizens elected a group of electors, who in turn picked the Assembly, but not every citizen was eligible to vote. Men above the age of 25 who paid taxes equal to at least three days’ wages as a labourer were eligible to vote. The Declaration of Man’s and Citizen’s Rights was the first document in the Constitution. Rights like the right to life, freedom of speech, freedom of opinion, and equality before the law were established as ‘natural and inalienable rights, meaning that they belonged to each human being from birth and could not be taken away.

The National Assembly voted in April 1792 to declare war on Prussia and Austria. The Marseillaise became France’s national anthem. Women took care of their families while their husbands were gone fighting in the war. Because the Constitution of 1791 only granted political rights to the wealthy, large segments of the populace requested that the revolution be carried on. Political clubs arose, with the Jacobins emerging as the most successful. Small shopkeepers, artisans such as shoemakers, pastry cooks, watchmakers, and printers, as well as servants and daily wage labourers, were all members of the Jacobin club. Long striped trousers, similar to those worn by dockworkers, were adopted by Jacobins. The sans-culottes, literally “those without knee-breeches,” were a group of Jacobins. Jacobins seized the Tuileries Palace on August 10, 1792, and kept the king captive for several hours. Elections were held, and all men aged 21 and up were eligible to vote. On September 21, 1792, the monarchy was deposed and France became a republic. On the charge of treason, Louis XVI was sentenced to death by a court.

The Reign of Terror

The reign of terror, which lasted from 1793 to 1794, is known as the Reign of Terror. People that Robespierre considered to be enemies of the republic were apprehended, imprisoned, and prosecuted by a revolutionary tribunal. They were guillotined if they were found guilty by the court. The guillotine, named after Dr Guillotin, is a beheading device that consists of two poles and a blade. Laws were passed to set a maximum wage and price ceiling. Rations were imposed on meat and bread. It was forbidden to use expensive white flour. Equality was demonstrated via speech and address. Citoyen and Citoyenne were the terms used to address all French men and women (Citizen). He was convicted by a court in July 1794 and sentenced to the guillotine the next day.

The fall of the Jacobin administration allowed the upper middle classes to seize control. Non-property portions of society were denied voting rights under the new constitution. It established two legislative councils that were elected by the people. The government appointed a Directory, which was made up of five executives. Political unrest created the path for Napoleon Bonaparte, a military dictator.