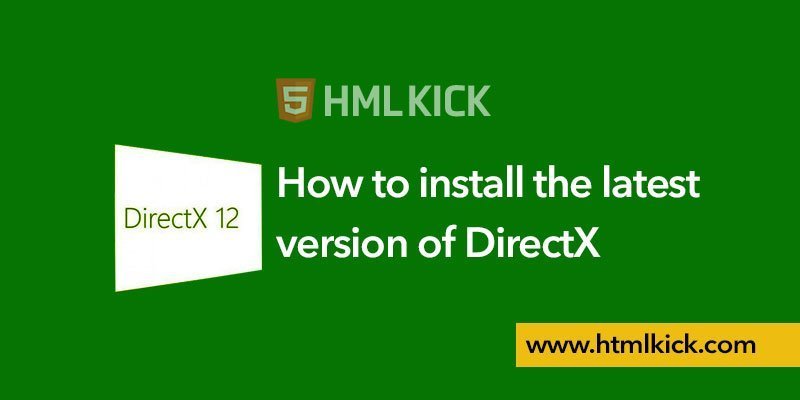 How to install the latest version of DirectX

The Windows will allow gaming enthusiasts to enjoy an immersive and enhanced gaming experience. With that in mind, we need to know which the latest Windows 11 DirectX is. But what is DirectX and what is it used for, to begin with? Which is the latest DirectX for Windows 11?

What is DirectX Ultimate?

DirectX happens to be a series of APIs (Application Programming Interfaces) that offer low-level access to components of hardware, including the sound card, video cards, and memory. I’m going to break this down for you. Basically, DirectX lets the game “communicate” with video cards.

During the DOS days, games were used to directly access motherboards and video cards. One could edit and make changes to the configuration file. However, with Windows 95, the access was restricted to low-level hardware to enhance security.

For that, games couldn’t interact with low-level hardware features, which was an issue. Thus, to enable this access, Microsoft designed DirectX. You can think of DirectX as a middleman tasked with the responsibility of facilitating communication between a video card and a game.

DirectX is one of the many API protocols available today. However, this DirectX is native to Windows, which makes it stand out. With DirectX 12 Ultimate, Microsoft has been able to blur the line between Xbox Series X and PC. That makes it much easier for any game developer to design games for each platform.

Latest Version of DirectX: DirectX 12 utilizes the DirectX 12 foundation. It includes some features that have been formulated over the last couple of years. DirectX Ray-tracing 1.1 – as more and more games start to picking up ray-tracing, DirectX 12 Ultimate integrates natively the features into Windows and the Xbox Series X.

Also, DirectX12 Ultimate features variable-rate shading, which allows a GP to use its resources more efficiently to render in-focus objects. That leads to enhanced frame rates and increased fidelity. Additionally, you get features such as Sampler Feedback that boost texture quality without draining resources. Generally, you get a set of enhancements that ought to make the next generation games operate smoother.

The latest Version of DirectX, DirectX 12 Ultimate enables game developers to offer more immersive games characterized by higher-quality textures and real lighting. Thanks to these features incorporated into Windows, users can immediately begin to see a difference as long as one has a video card that is compatible with the latest edition of DirectX.

How Will DirectX Change the Gaming World?

DirectX replaced Win32 and a lot has happened since then as far as the designing of DirectX is concerned. At this moment, DirectX 12 Ultimate is the latest DirectX. Windows 10 is running DirectX 11 and the most up-to-date DirectX for Windows 11 is going to be the DirectX 12 Ultimate.

Users of Windows 10 will get the newest DirectX when they upgrade to the latest Windows. They will have to download it manually. DirectX 12 Ultimate is an important upgrade that introduces more features into Windows and the Xbox Series X. Users will enjoy variable-rate shading, meaning that the GPU can use all of its resources to provide the in-focus objects more actionably.

What’s more, that will offer better frame rates and increased fidelity while gaming. And as mentioned, it will bring DirectX Ray-Tracing 1.1 on board. Users will see features like the Sampler feedback, which will help enhance the texture quality of the game while using lesser resources. That means that your games will run smoother and you’ll be able to enjoy the overall in-game experience.

With the latest DirectX, users can expect more immersive games to be introduced for Windows. As mentioned, we will be able to enjoy the high-quality texture and more life-like lighting. DirectX 12 Ultimate will be available on Xbox Series X after having come on millions of graphic cards utilized on Windows PC. Indeed, DirectX12 ultimate is already starting to pick up on NVIDIA GeForce RTX series graphic cards.

DirectX12 Ultimate is going to be the latest DirectX for Windows 11. It will also be the first version of DirectX to debut on Xbox, which meant that it will come with many modifications to the games for Windows. Game developers will now concentrate more on developing high-end games for Windows.