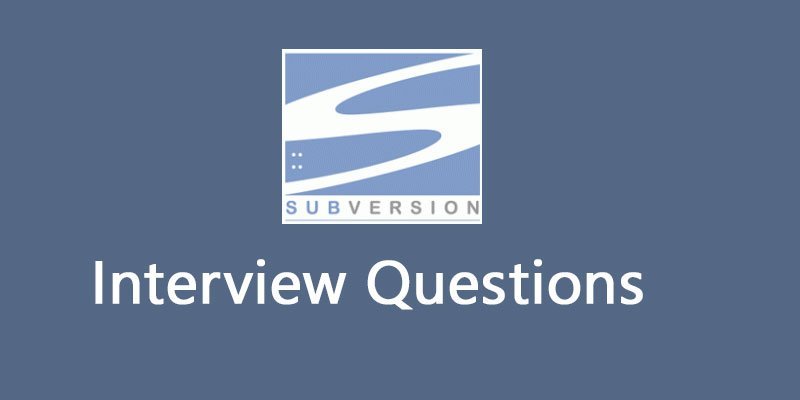 SVN Interview Questions: Subversion is abbreviated as SVN. It is a widely used version control system in many businesses. When applying for jobs with various firms, it’s also critical to be familiar with SVN interview questions. To help you master your next job interview, we’ve compiled a list of the most typical SVN interview questions and answers.

Subversion, or SVN, is an open-source code management system. It’s used to keep track of all the modifications to your source code or files. It’s a database that keeps track of files, folders, and directories, as well as the changes made to them over time. The SVN repository maintains a complete history of file changes and can easily track who made changes to the file.

2. What is the purpose of the Revert command in SVN?

Revert is a command that is used to “revert” any code modifications that have been made locally. There are two sorts of revert functions:

Local Revert refers to the process of removing all recent modifications to files made after the start of updates and before the commit function.

All changes made to the previous repo are referred to as Repo Revert.

3. What are some of the most effective SVN PRACTICES?

The following are some of the best SVN practices to follow:

4. What is the distinction between a GIT repository and an SVN repository?

The distinction between SVN and GIT is as follows:

Git doesn’t allow you to make “commits” that span many branches or tags. Subversion allows you to create folders at any point in the repository hierarchy.

Subversion allows committers to consider a tag as a branch and generate several revisions under a tag root, but Git is immutable.

Git is not recommended for handling huge files or binary files that change regularly, but SVN can handle numerous projects in the same repository.

5. What is the distinction is between commit and update?

6. Explain how to use SVN to apply a patch.

To apply a patch in SVN, you must first “Create Patch” by making changes and generating a.diff file. Then, using “Apply Patch,” you can apply this .diff file to the new codebase.

In SVN, the trunk is the main development line. It keeps track of all modifications made to files and directories that haven’t been distributed or published yet.

Batch refers to a collection of commits (commands) that have been merged into a single action rather than being submitted individually for review before being uploaded all at once.

8. What is the SVN checkout command and how does it work?

The most essential feature of this software is the SVN checkout command. It allows you to get a local copy of your repository and use it without having to install any additional dependencies or tools.

9. What makes SVN stand out from other version control systems?

SVN is one of the most well-known and widely used version control systems. Although it has been around for a long time, it may not be appropriate if you are working on anything that requires more regular updates or tracking than SVN can supply.

10. What is the purpose of the revert command in Subversion?

The revert command in the SVN software is used to undo changes that have been committed. This can be useful if you’re working with a group and need to go back to an earlier stage of development before moving forward.

11. What are some of the security vulnerabilities associated with SVN usage?

One disadvantage of using SVN is that it stores all data locally on your computer, which means that if you lose access to your device for any reason (such as a hardware breakdown), everything you’ve saved will be permanently lost! When using distant servers, you must also provide sensitive information such as passwords, which may put you at risk if others have access.

Other potential issues include not being able to track changes efficiently – because when someone commits something new to the GitHub/Bitbucket hosting service, they only get updates about those files rather than being notified of every change – and having to commit manually each time, which can be a lengthy process if there are numerous updates.

12. Is it possible to utilize SVN with GitHub?

This is doable, but it necessitates the installation of two separate apps and their subsequent integration via SSH connections between your machine and the distant server. It may appear complicated at first, but after everything is in place, the procedure gets a lot simpler! This will also allow you to save all data locally while automatically synchronizing changes online, ensuring that important files are always safely backed up!

13. When I push my repository, what happens?

This command will upload your local copy of data from the Git program (that is stored locally) to the GitHub or Bitbucket hosting service so that anyone else who wants access can see what has changed without having to download all files locally as they would have to do otherwise.

14. Describe the meanings of the result codes G and R in SVN.

In svn, the result codes G and R indicate:

Changes made to the repo were automatically merged into the working copy using G code.

15. Which commands are available for moving a chunk of code and its history from one SVN repo to another?

The commands listed below can be used.

16. Make a list of everything that should be kept in the SVN repository.

You can save files in an SVN repository.

17. What are the most commonly used subversion commands?

The following are some examples of subversion commands.

It also includes commands such as revert, moves, copy, and merge.

18. How can you go back to an earlier version?

You must use the “revert” command to get an earlier version. However, the revert command will simply erase local edits; instead, you should use the “merge” command. For example, suppose you have a file [abc.txt] that is currently at version 101 and you want to upgrade to version 201. Then you’ll use a command like this:

19. What are the advantages of Subversion vs GIT?

Git may appear to be superior to SVN since it has more functionality, but SVN may be preferable if you’re still working on projects that need to be updated regularly or tracked more effectively.

TortoiseSVN is a Subversion client that works as a Microsoft Windows shell extension that allows programmers to manage multiple versions of their source code. It is free software that is distributed under the terms of the GNU General Public License.

22. HOW DO I TAKE ADVANTAGE OF SOPHISTICATED CAPABILITIES LIKE BULK UPLOADS AND FILE TAGGING?

Before moving any further, you must first understand how to use these sophisticated capabilities by reading through their help menus within the software application itself.

23. What is the command for creating a new version-controlled directory?

To create a new version-controlled directory, use the following commands:

24. What Do You Mean When You Say “Synchronize With Repository”? What is the difference between it and “update”?

Synchronizing with the Repository is a means to keep the local workspace up to date with other people’s progress. This is different from Update in that it allows us to execute Merge Manually for Merge Conflicts.

25. How can I stack the latest version of code from the SVN worker while ignoring my local changes?

One can choose between two options:

After you’ve completed an update, return your progressions. That will ensure a flawless checkout. It will, however, undo your local changes.

Take a look at another immaculately maintained functional registry. There’s no reason why you can’t. It’s a preferred stance, but it won’t affect your current situation.

26. In SVN, how do you verify the content of a repository?

To examine the content of a repository in SVN, go to your file directory and seek the ‘svn status‘ command, which will show you all the files that this program is now managing.

27. What’s the harm in utilising Git?

The major disadvantage of utilizing Git instead of SVN is that some hosting providers, such as GitHub, do not support it, making it impossible to get started unless you already have an account there.

28. What are the benefits of file tagging?

Ans. Tagging is a popular approach to keep track of data changes over time without having to sift through backups or changelogs. It also aids in remembering what changed and who made those modifications if something goes wrong with someone else’s work.

29. What are some SVN commands to start?

Here’s a rundown of SVN commands:

If something is incorrect with your work and you want to fix it, type ‘r‘ and then ‘enter’ on the command line. You can also use this to go back to a previous version.

Getting a job after an interview is a dream come true for anyone who wants to work for a company and learn and grow. It will be quite easy for you to ace any job interview questions and answers if you follow the above fundamental questions. The complexity of svn interview questions varies, but what matters is how well you respond to them.