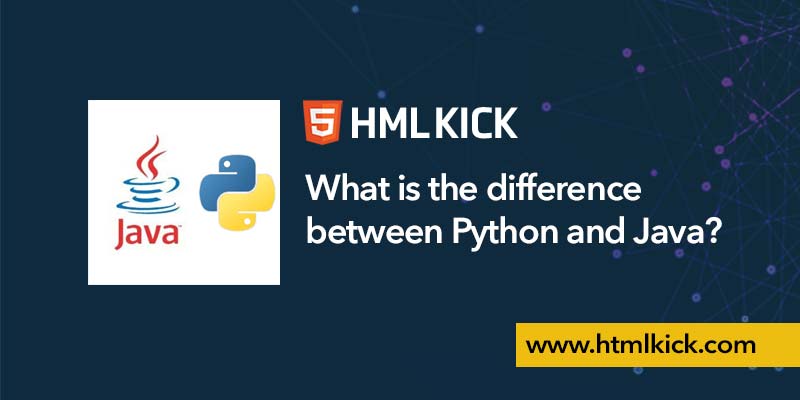 Difference between Python and Java: Java & Python are among the hottest languages for programming in the market. This is due to its versatility, automation, efficiency, and capabilities. Both Java and Python stand out for their dominant cross-platform support and their extensive libraries. Moreover, they do shine in various applications.

Before selecting which language for programming is better, it’s significant to evaluate the major differences.

What is the difference between Python and Java?

Python is a very dynamic language. As you type, the developer does not have to put the variables which are input during runtime. Hence, this makes Python a simple language, nearly comparable to English.

Java is the opposite. It contains strict syntax rules. You are required to type in every variable, & you will have an error or anomaly at the code, or the program will not run.

Python has a very simple syntax, and thus people from various backgrounds saw it as a comfy choice. Using Python, it’s easy to experiment with machine learning & utilize it in their corresponding fields. This is the way Python started the adaptation of machine learning through more organizations. Presently it has a vast library & resources which are accessed & developed further.

Java is considered as an alternative by many. It has characteristics like the ease of debugging & usage, it’s utilized for large-scale operations & enterprise-level programs.

Both Java & Python are operated by compiling bytecode & running them on virtual machines. Both of these languages are cross-platform, which has no operating-system differences. It may look that all have the same performance, but there’s a basic difference between the two.

Java is described through static-typing syntax. With this variety of syntax, the compilation is easier & quicker compared with dynamic-typed syntax. It’s less disposed to errors & targets platforms that it’s aimed for well.

Java comes using a Just-in-time compiler. The device compiles bytecode to the native machine, the reason being the compiled code is called directly. The function primarily adds the speed & efficiency of language. Java codes are quite long & can get hard to understand.

Python language, the code is processed during compile time, & this is when variables are reflected. Code typed at dynamic-type syntax is not agile/verbose to observe with all the platforms.

Python is usually tested during runtime and any issue with the program keeps the entire application on hold. All the variables together led to decreased efficiency & language speed.

Java is a compiled & Interpreted Language. This can be deliberated since the source code is compiled to a binary bytecode, which in turn operates on a JVM interpreter.

Python programing language is an Interpreted-Language that is dynamically typed.

Python offers fast development because of its easiness, practicality, and simplicity to write.

Projects in Java are likely to take a long and may need bigger development teams.

Python tests syntax during runtime, hence not stable like Java despite fast development.

Java language has higher stability because everything should be reviewed & recognized before running. Java code needs to be well written &, thus, the software may be less prone and more stable to crashes.

Java can be a more popular choice, though Python is more used. More people from out the development industry have utilized Python for numerous organizational purposes. Java is relatively faster, though Python is excellent for lengthy programs.

Eventually, this depends upon the kind of program an inventor needs to create. If one considers the above parameters, & a language ticks more of the boxes, it’s secure to move ahead using it. However, if you’re beginning to venture into the development field, Python is an excellent choice. Java is a preferred choice for programs of enterprise-level.