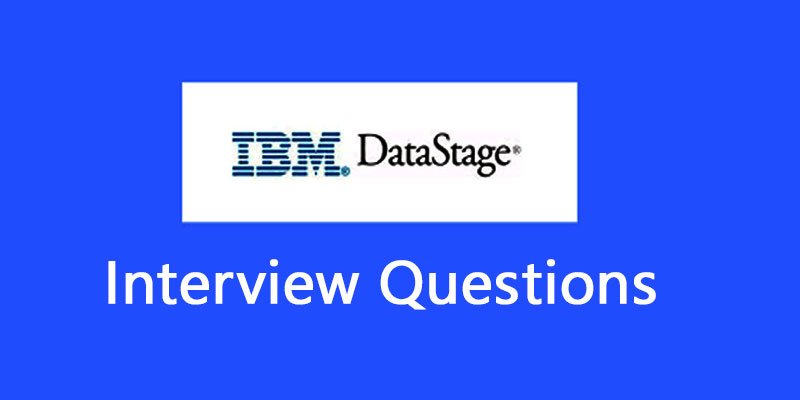 Essential Datastage Interview Questions: DataStage is an ETL (Extract, Transform, and Load) tool. It’s a graphical notation that’s used to build/construct data integration solutions. It comes in a variety of variations, including SE, EE, and MVS editions. Job availability can be checked in cities such as Bangalore, Pune, Chennai, and Hyderabad.

A data stage is a tool for designing, developing, and executing several applications to fill multiple tables in a data warehouse or data mart. It’s a Windows server tool that extracts data from databases and transforms it into data warehouses. It’s become an indispensable component of IBM’s WebSphere Data Integration package.

2. Can you explain how a source file is filled out?

We can populate a source file in a variety of ways, such as writing a SQL query in Oracle, utilizing the row generator extract tool, and so on.

3. What are the names of the command-line functions for importing and exporting DS jobs?

Many new stages, such as Procedure Stage, Command Stage, Generate Report, and others, have been added to Datastage 7.5 for increased robustness and smooth performance.

5. What are the Functions and Types of Datastage Funnel Stages?

The Funnel stage is a stage in processing. Multiple input data sets are copied to a single output data set. This method can be used to combine multiple data sets into a single large one. There can be an unlimited number of input links and only one output link on the stage.

There are three ways to use the Funnel stage:

The records of the input data are combined in no particular sequence using Continuous Funnel. It takes one record at a time from each input link. If data isn’t accessible on one of the input links, the stage moves on to the next one instead of waiting.

Sort Funnel combines input data in the order indicated by the value(s) of one or more key columns, and these sorting keys determine the order of the output records.

All input data sets’ metadata must be identical for all methods. Column names should be consistent across all input links.

6. CAN YOU TELL THE DIFFERENCE BETWEEN THE DATA STAGE AND Informatica?

7. Can you tell the difference between a data file and a descriptor file?

8. What are the different sorts of routines?

Routines are a collection of functions that the DS manager defines. It can be accessed through the transformer stage. Parallel routines, mainframe routines, and server routines are the three types of routines.

9. Without using the remove duplicate step, what is the best way to get rid of duplicates?

The Sort step can be used to remove duplicates. Allow duplicate = false is an option we can utilize.

10. In datastage PX, how do you construct parallel routines?

Parallel routines can be written in the C or C++ compiler. Routines of this type can also be developed in DS management and invoked from the transformer stage.

11. What is the Quality stage?

The Integrity stage is also known as the Quality stage. It aids in the integration of numerous types of data from a variety of sources.

12. What is the definition of job control?

Job Control Language is the best way to execute job control (JCL). This tool is used to run numerous jobs at the same time without utilizing a loop.

13. How do you tell the difference between symmetric and massive parallel processing?

The hardware resources are shared by the processors in Symmetric Multiprocessing. The CPU runs a single operating system and communicates with one another through shared memory. During Massive Parallel processing, the processor has exclusive access to the hardware resources. Because nothing is shared in this form of processing, it’s also known as Shared Nothing. It outperforms Symmetric Multiprocessing.

14. In the Datastage, what is the difference between validated and compiled?

15. What are the primary distinctions between the stages of Lookup, Join, and Merge?

All are used to join tables; however, there is a distinction.

If the reference data is extremely huge, we will use join. Because it reads data from the disc directly. As a result, the processing time will be shorter than the lookup time. However, we are unable to capture the rejected data in join. As a result, we’ve decided to merge.

Merge: We use the merge stage to capture rejected data (when the join key isn’t matched). There is a reject link for each detailed link to capture data that has been rejected.

16. How does Datastage handle date conversion?

17. In Datastage, why do we employ exception activity?

If an unexpected error occurs while performing the task sequencer, all stages after the exception activity in Datastage are executed.

18. In Datastage, how do you define APT CONFIG?

It is the environment variable that is utilised in Datastage to identify the *.apt file. It’s also where node information, disc storage information, and scratch data are kept.

19. What are the different forms of Datastage Lookups?

Normal lkp and sparse lkp are the two types of Lookups in Datastage. The data is kept in memory first in normal lkp, and then the lookup is performed. The data is directly saved in the database in sparse lkp. As a result, the sparse lkp outperforms the Normal lkp.

21. What are the many kinds of lookups? When is it OK to utilise sparse lookup in a job?

There are two sorts of lookup options available in DS 7.5:

There are three sorts of lookup options available in DS 8.0.1 and later.

Normal lkp: To execute this, lkp data is first stored in memory, and then lkp is conducted, resulting in a longer execution time if the reference data is large. In a normal lookup, the complete table is loaded into memory and the lookup is performed.

If the reference link is directly connected to the Db2/OCI Stage, the result is fetched by launching one-by-one queries on the DB table.

Range lookup: this allows you to search for records inside a specific range. Instead of searching the entire recordset, it will only search that specific region of records and deliver good results.

i.e. Select the upper bound and lower bound range columns, as well as the relevant operators, to define the range expression.

22. In the Datastage, what’s the difference between validated and compiled?

23.  How Do Datstage Implement Complicated Jobs To Recover Performance?

24. What are some examples of third-party tools that can be used with Datastage?

Autosys, TNG, and Event Co-ordinator are examples of third-party technologies that can be utilised in Datastage.

25. What is the best way to describe a project in Datastage?

26. What Are Link Partitioner And Link Collector Used For In Datastage?

Link Partitioner in Datastage is used to divide data into different portions using various partitioning methods. Link Collector gathers data from multiple partitions into a single file and saves it in the target table.

27. How Does Datastage Handle Discarded Rows?

28. What’s the difference between Datastage and Datastage Tx?

Datastage is an ETL (Extract, Transform, and Load) tool, while Datastage TX is an EAI (Enterprise Application Integration) tool.

This informative blog will teach you everything you need to know about the ETL process.

29. What are the different types of hash files?

30. In Datastage, what does NLS stand for?

The acronym NLS stands for National Language Support. It can be used to include foreign languages in data, such as French, German, and Spanish, that are required for data warehouse processing. The scripts of these languages are identical to those of English.

You should have a good understanding of Datastage’s design and key features, as well as be able to explain how it differs from other popular ETL solutions.

You should also have a good understanding of the various stages and how to use them, as well as how to create and run a Datastage job from start to finish.