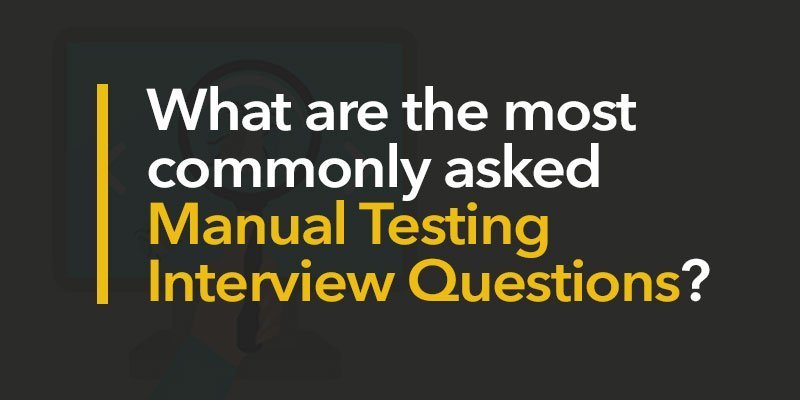 Manual Testing Interview Questions: Software testing is a crucial part of the success of any software. Manual testing plays an essential role in software development & comes in handy every time you have a situation where one can’t utilize automated tests. Therefore this makes it a great opportunity for individuals with the required skills for manual testing to be hired. When preparing for manual testing interview questions, this article will offer you a perfect guide for you to get what will be required by the Software Testing Interview panel.

What are the most commonly asked manual testing interview questions?

This is a validation process that approves that a system operates as required by the business. It succeeds a system on different aspects like usability, completeness, accuracy, efficiency, and more others. ANSI/IEEE-1059 is a global standard that states the basic testing principles.

What’s the importance of testing?

What are the 2 major categories of software testing?

This is a big domain though it can be largely categorized into 2 areas. These includes:

Automation Testing – It’s the process of utilizing the assistance of scripts, tools & software to do test cases through repeating pre-defined acts. Test-Automation concentrates on replacing-manual human work with devices or systems that improves efficiency.

When should one stop a testing process?

The testing process ends when a testing team finishes some of the milestones.

The end date of the validation stage states the closure of validation if there are no critical/high-priority defects that are remaining in a system.

Successful accomplishment of a complete test cycle after final bug-fix marks end of the testing phase.

This refers to the average amount-of-time that a product or device functions before it fails. The unit of measurement includes just operational time in between failures & doesn’t include the repair period, assuming the product is repaired & starts functioning again. Mean Time-Between Failure figures are normally used in projecting how likely a single-unit is to fail in a certain period.

This is the amount of code-concealed through automated tests. If the team attains the anticipated level of CC (code coverage) ratio, then it chooses to end validation.

This is a product-oriented method of running software to determine if it defects. This also makes sure that the software suits all of the requests put forth by stakeholders.

This is a process-driven method that checks if the development process of the product is correct & conforming to every standard provided. It’s considered a preventive measure. The reason being it identifies weaknesses in process of building software. It also comprises activities like test case review, inspection, document review, walk-throughs, etc.

What’s static testing, when does it start & what does it entail?

SDLC is a short form of the Software Development-Life Cycle. This refers to every activity that’s performed in any software development. The activities include requirement gathering, designing, requirement analysis, coding/implementation, testing, maintenance, and deployment.

What different types of manual testing are there?

Various kinds of manual testing include;

It’s a normal software testing method that needs testers for assessing the functionality of the software as required by the business. Software’s are treated as a black-box & validated like the end user’s point-of-view.

This is derived from a use-case. It’s utilized for end-to-end testing of features of the application. A single test-scenario caters to numerous test cases. Scenario testing is mainly useful when there’s a time constraint as you do the testing.

This is a formal document that describes the scope of testing, a method to be utilized, resources required & time estimate for carrying out the testing process. It’s derived from requirement documents which are Software Requirement Specifications.

This is data that’s utilized in testing the software with various inputs & helps in checking whether a corresponding output is as per expected outcomes or not. This information is made based on business requirements.

This is a quality metric that represents the percentage amount of testing finished for a product. It’s important to all functional & non-functional testing actions. The metric is utilized to add missing test cases.

What’s the difference between beta testing and alpha testing

What are integration testing & unit-testing?

Unit testing consists of numerous names like module/testing or component/testing.

Integration testing authenticates how best two/more units of the software relate with each other.

The three ways to validate integration include

What’s agile testing & why is it significant?

This is a software testing process that assesses software from customers’ point-of-view. It’s favorable as it doesn’t need a development team for complete coding to begin QA. Instead, all coding & testing go hand-in-hand. However, this needs constant customer interaction.

What’s the importance of end-to-end testing?

This is testing strategies that execute tests that cover all likely flow of application from its beginning to finish. The objective of doing end-to-end tests helps in discovering software dependencies & to asserts the correct input is passed between numerous software modules & sub-systems.

What are the various levels of manual testing?

The four levels of manual testing include

This is a collection of software & test information configured for testing a program unit through running it on varying conditions. This involves monitoring output with the expected output.

What are the various kinds of severity?

The criticality of bugs can be medium, low, or high. This depends on context.

API-testing is a kind of software testing where the application programming interfaces (APIs) are verified to determine if they suit expectations for reliability, functionality, performance, & security. In other terms, API-testing is anticipated to disclose bugs, deviations, or inconsistencies from the likely behavior of API.

When should one choose manual testing instead of automation testing?

Some cases where one should opt for manual testing over automation testing, include:

What’s the advantage of test reports?

This is a bug with high priority & high severity. This blocks or prevents the testing of other major portions of an application.

This is a concealed defect in application/software and cannot be recognized by a client. However, this can’t cause failure to application because the state will not be met.

This is a software testing method for designing test cases wherein boundaries values of classes of equivalence class-partitioning are taken as input to test cases. For example, if test information lies in the range of 0-100, boundary value analysis includes test data from 0, 1, 99, and 100.

What’s the difference that’s there between a bug, an error, and a defect?

With this guide, you will have basic knowledge of what will be needed in an interview. Remember, interview preparation doesn’t just entail the best dress code, but also mental. Checking the possible interview questions will also help in improving your mental state.