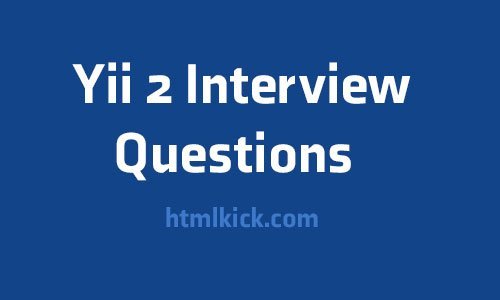 It is a generic programming framework that web developers can utilize to create virtually, all types of web applications using the PHP framework. Its essence is to make sure that code is written in the simplest way possible.

What are the new features that have been introduced with YII 2?

What requirements does your system need to run Yii 2?

It must have an installation of PHP 5.4.0 or higher although PHP 7 is recommended.

What do you mean by Yii helpers?

These are classes that simplify common coding tasks like generating HTML coding.

What does active record in Yii 2 stand for?

The active record offers an object-oriented interface that helps developers to retrieve and manipulate data from a database. An active record is part of a database table that corresponds to a single row of that table.

State the difference between home Url and baseUrl in Yii 2

How can a flash message be set in Yii 2?

In Yii 2, a flash message is used to keep messages in session even though it is requested by the same user. It can be set using the setFlash() method.

What is the purpose of GII in Yii 2?

A code generator that helps developers in creating and generating customized forms, models, and databases.